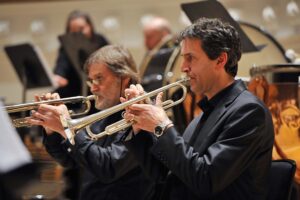 Robert Baxter is a trumpet graduate from the Royal Conservatoire of Scotland. He has performed, and continues to perform with all the professional orchestras in Scotland, particularly the Royal Scottish National Orchestra, BBC Scottish Symphony Orchestra and Scottish Ballet Orchestra.  Robert has toured, recorded and performed at all the major concert halls and festivals throughout the UK such as the BBC Proms and the Edinburgh International Festival. He has also worked with the Mahler Chamber Orchestra, Singapore Symphony, Tenerife Symphony, Bruckner Orchestra Linz, Manchester Camerata, New London Consort, Flanders Symphony. 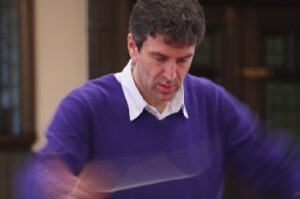 He studied Conducting with Ilan Volkov and Kristian Kluttig and has conducted the Lithuanian State Symphony, RSNO and numerous productions with Scottish Ballet at theatres throughout the UK. This includes Prokofiev’s Cinderella and the company’s new production of Dextera (Mozart) and Snow Queen ( Rimsky Korsakov).  He has been Musical Director for Colours Classical and for the band, Belle and Sebastian in the SSE Hydro in Glasgow and for Goodgreef Classical. His debut at Celtic Connections was to conduct a BBC TV broadcast from the Royal Concert Hall in Glasgow with the Irish folk group The Chieftains and Kris Kristofferson.

He has been passionately involved with youth and community conducting for over 20 years and is currently the Musical Director for the Glasgow Chamber Orchestra, Dunblane Chamber Orchestra, Helensburgh Orchestral Society and the Dunbartonshire Concert Band. With the latter, he has commissioned and premiered new works, recording CDs, toured, won top awards at competition and conducted around 150 concerts. He has also been guest conductor for the Glasgow Orchestral Society and for Amicus.  Robert has been course director for the National Youth Orchestra of Scotland Spring Academy and he continues to teach trumpet and take performance classes at the Royal Conservatoire of Scotland Junior Department.

He has adjudicated many competitions including the Scottish Concert Band Festival alongside composers, Philip Sparke and Peter Graham.